Here you can find plenty of support for your reporting on BAU: reports, dates, photos, logos and lots more. These pages are updated and new material added constantly. So it´s well worth dropping by regularly!
If you want to contact us direct, just click here. 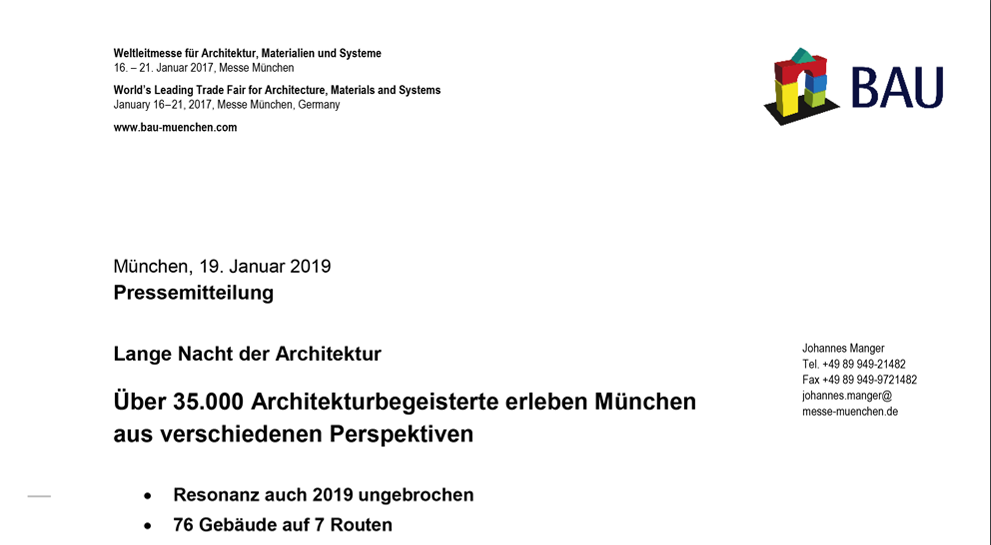 Find information about the exhibitors and their products, new suppliers, company profiles, contact persons and the latest press releases at the website for BAU 2017. 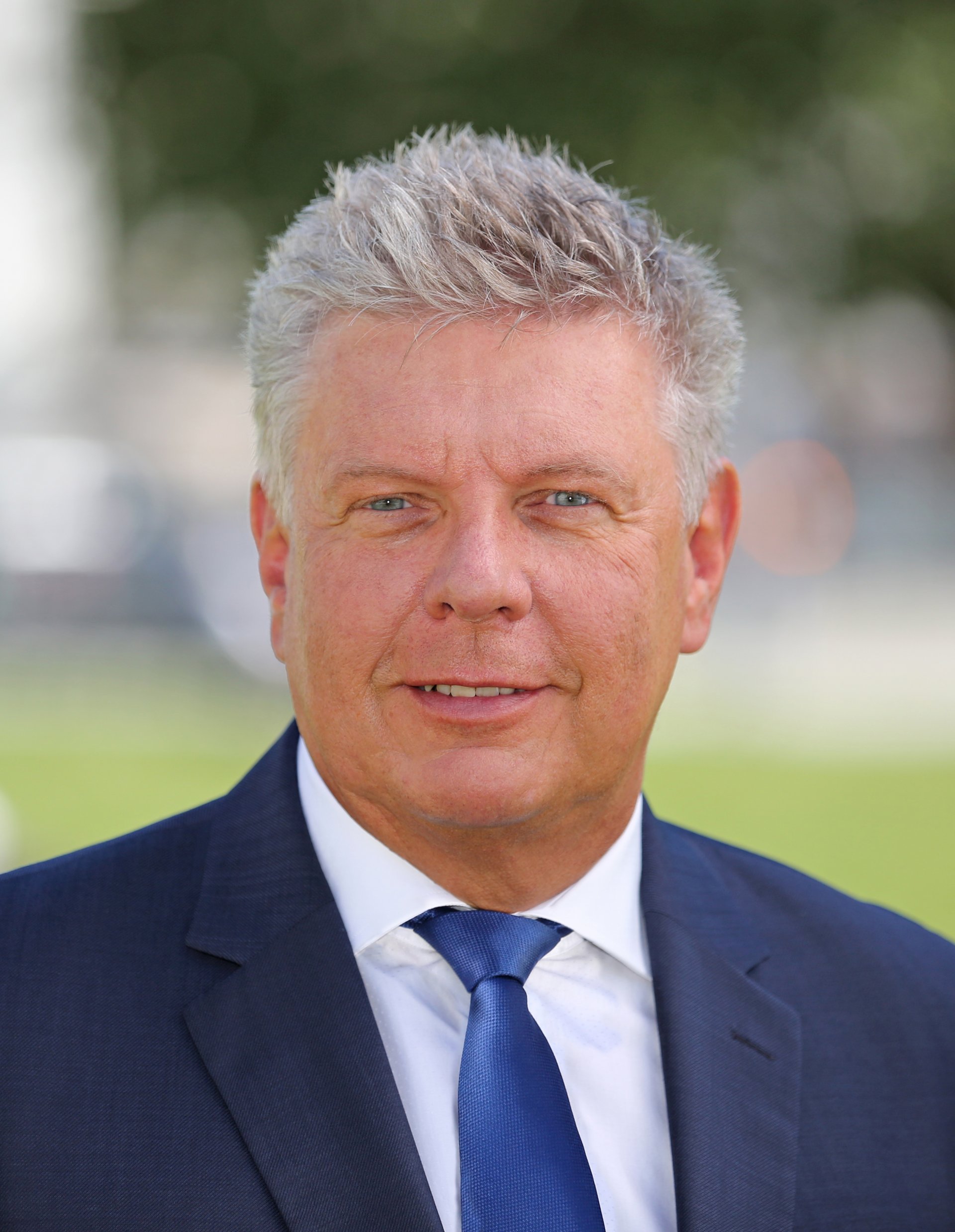 Architecture meets us everywhere. It shapes the face of a city and creates identity, especially because we like to argue about it often and gladly. A great opportunity to get to know Munich‘s architecture from another angle is the „Long Night of Architecture“, where you can explore the inner life of our city‘s architectural showpieces and gain new and unfamiliar insights into our built environment.

The „Long Night of Architecture“ taking place for the fifth time has since become a crowd puller: last time, two years ago more than 30,000 people wanted to experience Munich‘s most beautiful and interesting buildings in their nightly glow. And I am sure that on 18 January 2019, many will make a nightly foray through Munich‘s architectural world.

The Long Night shows that Munich has a lot to offer in terms of architecture. Not only the Old Town and the Olympic Park offer spectacular landmarks, there are numerous architectural gems that deserve to be discovered and appreciated.

Thus, the „Long Night of Architecture“ also creates the perfect bridge to BAU 2019, the world‘s leading trade fair for architecture which is taking place in the same week. Therefore, I am proud to again act as patron of this event. I wish the organizers every success in their efforts and I hope all the visitors will have an uplifting and enjoyable night-time encounter with Munich´s most exciting buildings! 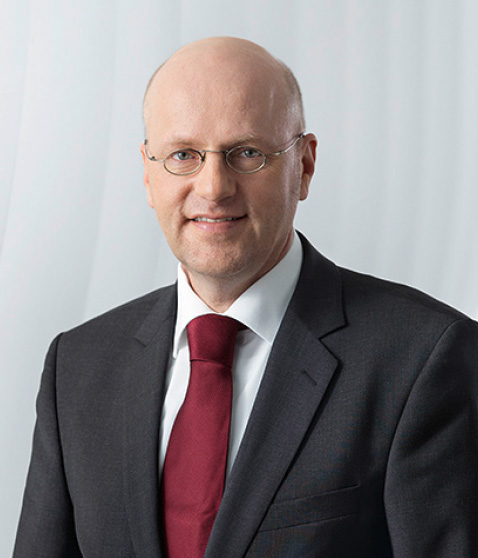 This year, the Long Night of Architecture takes place for the fifth time already – a small anniversary. We are very proud on it, all the more because it was in no way sure that the event would strike such a significant chord with city’s citizens.

When the idea was born and we launched the first Long Night in 2011, we were altogether skeptical. Would the topic of architecture, which can be quite challenging and strenuous, capture the attention of Munich’s citizens? Would they go out in a cold January night in order to explore their constructed environment?

Today, we know better: the Long Night of Architecture has been a success story virtually from the outset. Every two years, thousands of architecture fans let themselves be fascinated by Munich’s most beautiful and interesting buildings.

Thus, our idea bore fruit, namely to bring the topic of architecture from the exhibition halls to the city and to make it accessible not only for a trade audience composed of planners, architects and engineers, but also for the population at large. We wanted to build a bridge from BAU, the World’s Leading Trade Fair for Architecture, Materials and Systems, to the city of Munich with its constructed environment! And we have been successful!

Today, the Long Night of Architecture is a firm component in the city’s event calendar. I should like to extend my grateful thanks to those responsible for the City of Munich and the Free State of Bavaria for the good collaboration, and I am sure that the Long Night will attract thousands of people to the streets this time again. 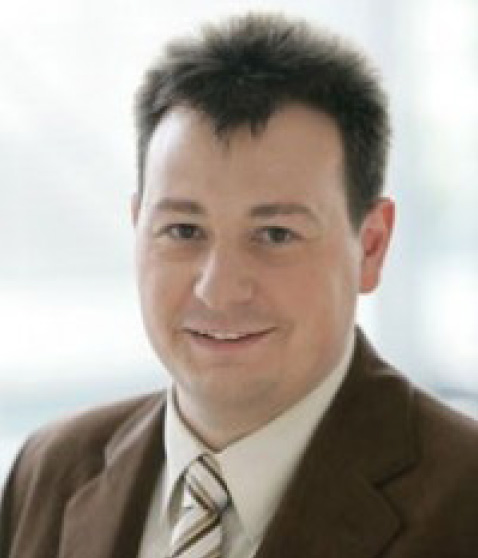 The experience that we can share here in Munich every two years bears witness to the great creativity of our architects. First, they get their ideas down on paper and finally onto the street. The Long Night of Architecture transforms ideas into living architecture.

That is exactly what happens during the Long Night of Architecture. However, this event does not only connect people, it also builds a bridge from BAU, our internationally leading trade show, which is reserved to an expert audience, to the architecture fans among Munich’s inhabitants. In this way, we show that the topics of BAU are not areas isolated from the environment.

There is a new topic which we have integrated into BAU and which is an ideal match for the Long Night of Architecture. It is the topic of light! Concepts for the interplay between daylight and artificial light play an increasingly important role in the overall concept of a building. In the Long Night of Architecture, visitors can see how light creates a very special mood and conveys a distinctive atmosphere to a building.

We are offering seven different theme tours exclusively for exhibitors and visitors of BAU. Each tour provides very special insights.

Important sites of urban culture and music are shown, just like the Olympic Park and its surroundings or office buildings with new concepts. More detailed information is available at www.bau-muenchen.com

The entire BAU Team wishes you an unforgettable evening.

Messe Munich GmbH and BAU 2021 would like to thank all the cooperation partners and sponsors involved in this initiative, and thank them warmly for their valuable support. 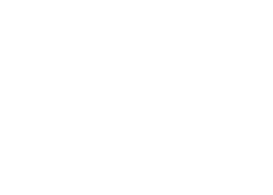 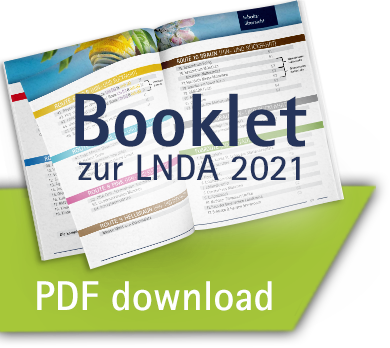